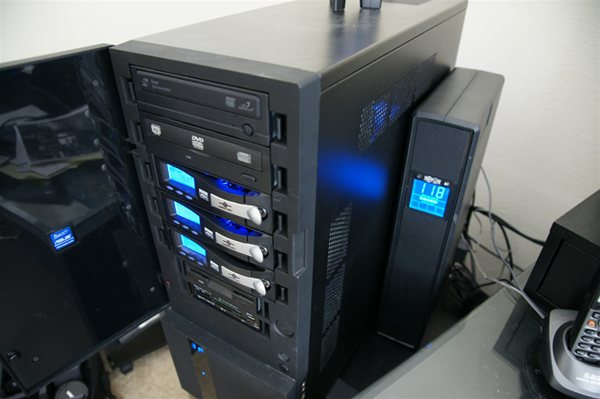 After making several upgrades to my workstation over the last 6 months, my old Tripp Lite OMNI1000LCD just wasn't cutting it anymore.  So it was time to upgrade to a UPS that would be able to stay on for more than 5 seconds.  I upgraded to the SMART1500LCD by Tripp lite.  Its an older model, but it handles 1500 VA and 900 Watts peak.  Of course whenever you buy a UPS off ebay especially a used one, you can expect a few surprises.

In my case the auction stated that the batteries work, but their life was not guaranteed, which to me means that worst case I would have to replace the batteries.  Other than that they also said part of the case was cracked.  Not a big deal. I am getting this for peace of mind, not so much for looks, although the blue LCD was a feature I wanted, so maybe looks mattered more than I want to admit.

Why buy a UPS off ebay

The SMART1500LCD comes with brackets that can be used for rack mounting, or to help it stay vertical.  It also handles a maximum of 900 watts.  The OMNI1000LCD handles 500 watts.  But unlike the OMNI1000LCD that has 8 plugs, 8 providing power protection, but only 4 giving you battery backup, the SMART1500LCD has 8 plugs and all of them provide both protection and battery backup.  Both units have USB so your system can view it like a laptop views its battery.  They also provide protection for Phone lines as well. Be Prepared to get new batteries for used UPS units.

Fortunately new batteries for this unit are not that expensive.  $20 each is a pretty good price.  It was also nice to learn that the SMART1500LCD and the OMNI1000LCD use the same model of battery.  Only difference is the SMART uses 2 of them while the OMNI uses 1.  I orderd 2 new batteries for this unit and hopefully this will take care of the issues I am having.  Right now with everything running off the UPS it will last 1 second and then its dead.  Keep in mind at full load my workstation consumes 500 Watts.  This unit should easily be able to let me run for 5-10 minutes.  This tells me that one of both batteries are bad.  When you are shopping for new batteries, find the model number of the battery then use google shopping to find the cheapest price.  For the Smart1500LCD the battery model was 12ce9-2.  The -2 infers there are two batteries.  This is the same battery used on the OMNI1000LCD, except only 1 of them.  Something interesting I found was that these batteries are also used on electric scooters.

UPDATE 3/30/2010
Today the two replacement batteries for my UPS arrived ( 12ce9-2 ).  I swapped the batteries out, powered
on the UPS, and then powered on my workstation.  I checked my killawatt meter and it said I was using 560 watts.  Then for the real test.  I pulled the power plug on my UPS, forcing it to power my workstation.  Before switching out the batteries the UPS ( while trying to drive my workstation ) would last about 1 second and the system would die.  This time it lasted just fine.  I left it unplug for about 10 seconds, and it had only dropped the battery by 1 bar ( out of 5 ).  So looks like new batteries was the answer.  Saved myself about $100 by getting a used one off ebay and replacing the batteries.
Permalink
7800 Visitors
7800 Views
Tweet

Categories associated with upgraded to SMART1500LCD Tripp lite from OMNI1000LCD