If you have a smart phone they you likely also have an microSDHC card for storage of your photos, videos, and Apps.  However all microSDHC cards are not created equal.  In this blog I will run some benchmarks on a few cards I had laying around.  Hopefully people can use this data to help them make informed decisions on what card they want to buy.

What is a microSDHC card

Its a very small storage card that has become the preferred storage for almost all smart phone manufacturers.  MicroSDHC cards are the smaller cousins of SD cards.  They are constructed of NAND flash memory chips, and support various read and write speeds.

MicroSDHC cards can be classified by two factors.  Class (speed) and Capacity.  Currently capacities of microSDHC cards go as high as 32GB.  Speed ratings go as high as class 10.  The class ratings vary from class 2, class 4, class 6, class 8, and class 10.  The number represents the minimal write speed of the card in MB/sec  or MegaBytes per second.  The higher the capacity and and the higher the class the greater the performance, but also the exponentially more expensive the card will be.

Since I have a few microSDHC cards laying around and just upgraded my HTC Sensation 4G to a 32GB class 10 card, I decided I would run a few benchmarks to compare the performance difference between the various cards.

In this round of tests I will be using my HTC Sensation 4G Smart Phone. Its running the stock ROM from Tmobile ( Android 2.3.3 ) and is not rooted ( S-On ).  The guys on XDA-Developers are working on getting this phone rooted so everyone can load their own custom roms in which the performance should be much greater.  In the future once I am able to root my phone and load Cyanogen on it, I plan to rerun these benchmarks to see if microSDHC card performance increases with a custom ROM. SD tools is a free benchmarking tool that you can download from the Google App Market.  It will tell you your maximum read and write speeds to your micro SDHC card. 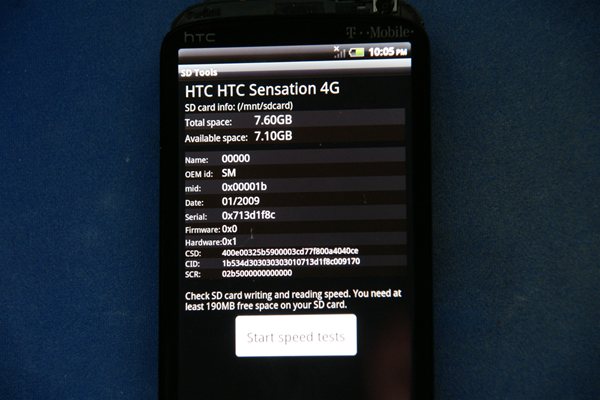 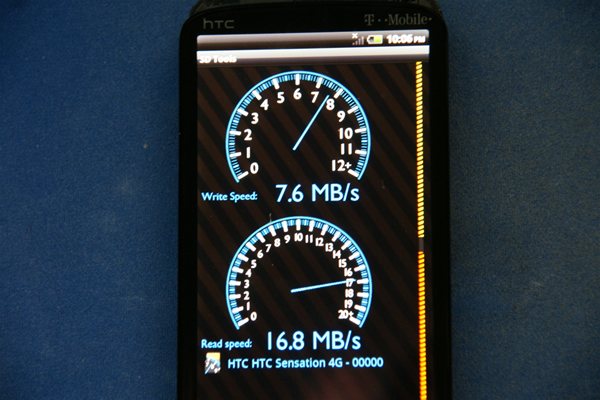 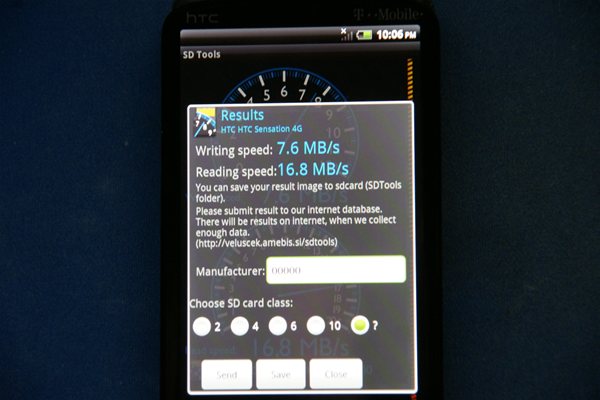 As you can see the performance gain from moving from a class 6 to a class 10 is not very great.  As matter a fact my Class 10 card doesn't even benchmark up to spec.  Hopefully it will move faster once I am able to root my HTC sensation 4G.  However keep in mind that 32 GB Class 6 microSDHC card ran $60 at the time of this writing.

Why would I want to get a faster microSDHC card for my phone?

getting a faster card will speed up the performance on photo and video based applications such as browsing your media gallery.  And if you are shooting 1080P HD video, then having a faster card can ensure that you don't miss frames due to your memory card running slow.  However using my 16GB class 2 memory card I didn't notice any performance issues when trying to record HD video ( 1080P ) with my HTC Sensation 4G.  There are other manufacturers that make class 10 cards.  From what I have read these other cards have much faster write speeds ( up to 16 MB/sec ) but some people have questioned their quality.  Its no good having a fast memory card if it stops working after a few months.

I hope this information helps others wondering about the performance benefits of buying that expensive class 10 memory card.
Permalink
47651 Visitors
47651 Views
Tweet

Rob | Jul 25, 2011 3:17 AM
I read on XDA-devs that the Lexar card fails miserably on random read/writes - so while it's good for writing continuous streams such as a long video, maybe they aren't the best in phones for the price that we pay.
Steve P | Dec 19, 2011 8:14 AM
Hi Paul, I've read your comments and tutorials with interest, and might even give one or two a try - your polished Sensation looks "sensational"! I'm based in the UK and have a Sensation supplied by Orange. I recently purchased a 32GB (Class 10) micro SD card to upgrade from the standard 8GB (Class 4) card that comes with the phone. However, I'm struggling to copy files and folders from the 8GB card to the 32GB one. I've tried variously copying from the 8GB to my laptop via USB, then copying from laptop to 32GB via SD adaptor in card reader slot. I've also tried copying directly from 8GB in phone to 32GB in SD adaptor. In both instances, the files appear to copy across (albeit rather slowly), but on inserting the 32GB in phone / or reopening it on laptop, approx 99% of the files have disappeared! This seems to suggest that there may be something wrong with the 32GB card, and I have raised concerns with the supplier (KOMPBAY). I've checked properties and it appears to show a genuine near 32GB capacity, and is formatted the same as the one in the phone (FAT32). Now, I'm not the most IT literate of people, so could easily be doing something wrong. Could you offer me step by step guidance or any other tips / advice? Thanks.
Paul | Dec 19, 2011 11:43 AM
@Steve
I never had any problems like that when migrating data to my 32 GB card.  I would recommend you reformat the card using your windows computer, then try to move your data again.  Also reinstall your card with the phone off, then turn the phone one.   If your data still isn't there, then it could be a defective card.  I know all MicroSDHC cards are not created equal.  I have heard bad things about the cheap ones on ebay.  Stick to the major brands, else its a gamble.
mark | Feb 16, 2012 2:27 AM
I see you are able 2 get write 7.6 read 16.8mb/s using Samsung 8gb class 6 card on your htc sensation , I tested my Samsung 8gb class 10 plus card , using sd tools app the speed varied between. , write 9.5 - 11.6mb/s read 4.8 - 5.1 , the read speed is quite low for a class 10 card , I.wonder why you are getting a higher read speed than I do , I've tested dozens of times but it will not read more than 5.1mb/s , I also tested with another app called system tester , this also gave similar readings , write 9.2 - 11.4 read 4.4 - 4.5mb/s , I was wondering why my read speeds won't go past 5.1mb/s , is my phone limited or faulty or is the card faulty , I scanned the memory of the card and every thing is ok , my phone is working fine no problems it has been upgraded to froyo 2.2 could this be the reason for low read speed .
Paul | Feb 16, 2012 9:34 AM
Mark,
I don't think your phone or card are faulty.  A lot of the speed issues could have to do with the ROM. I recently upgraded my HTC Sensation to Android 4.0, and my write speeds are now 6 - 7MB/s  While my read speeds are now about 25 MB/s.  This is using my class 10 Lexor microSD.  You might try upgrading to a 2.3 ROM or even 4.0 if one is available for you phone. Checkout XDA-Developers.com to find Custom ROMs for your phone.
Kevin | Jul 22, 2012 6:17 PM
Hi Paul, I have been wanting to upgrade my current stock 8gb sd card on my sensation. I am rooted and running a custom rom. I have been reading about how to do it, but even with researching, I am not confident enough to do it and be sure I won't make mistakes. The things I am unclear about are unmounting sd card, formatting from 4ext, things like that. Do you think you could help me out with some instructions on how to do it successfully? I would like to get a sandisk 32 gb class 6. It would be greatly appreciated.
Kind regards,
Kevin.
Pranav | Aug 12, 2012 9:19 AM
Hey man..!
Thanks a lot for the post. It was really informative and just the thing i was looking for. I ordered a class 10 memory card for my HTC One V and i get it that the read and write speeds would be higher than the lower class cards.
Just the last thing i am wondering is if a class 10 card would eat up more battery than a class 6 or class 4 card. If possible kindly throw some light on this aspect.

Paul | Aug 12, 2012 11:31 AM
@Pranav
I don't think the Class of SDHC card will affect battery life.  This is mainly because memory cards are required to meet the specs of the standard and this would include a specific voltage.  If you are trying to save battery life, I recommend trying an aftermarket ROM on XDA developers.  This will have tweaks for CPU governor, plus other settings that will shut down parts of your phone that drain battery but don't need to be running all the time.

vajira | Aug 21, 2013 4:10 AM
Hi paul..., I have HTC Sensation 4G smart phone. but I am having a problem with my SD card. It is a normal micro SD card 16GB(not a micro SDHC class 4). some times it was not detected from phone. Then I reinstalled memory card and It was working properly. after few hours that problem was came again. finally I inserted my SD card to card reader via computer. It was working properly. Is sensation 4g phone not support with normal micro SD card?
Paul | Aug 21, 2013 12:34 PM
Vajira,
I had a similar problem with one of my SD cards.  I recommend you put it in your computer, and backup all the data, then put it back into your phone and then use clockworkmod recovery to reformat the card.  At least that worked for me.
hizoka | May 31, 2014 9:21 AM