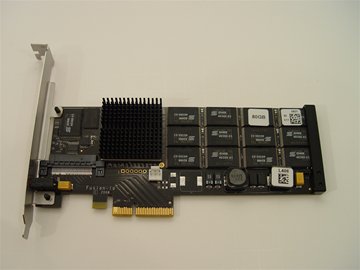 Fusion IO has a new SSD (solid state disk ).  Except this one doesn't connect with your typical SATA or SAS connectors.  This drive is card based.  Thats right you mount it on one of your available PCIe slots (assuming you still have one available ).  Since your PCIe slot can support up to 10 GB/sec transfers this is a huge jump in performance.  While other manufactureres are trying to pack NAND flash memory into 2.5 and 3.5 inch packages. Fusion IO has skipped this step all together.  After building my own workstation based on dual SAS drives in a RAID 0 configuration.  I feel like my system has just depreciated overnight.

It was inevitable that storage would eventually evolve into memory based storage.  After all you can only spin a 2.5 or 3.5 inch disk so fast.  The bench marks make it clear.  When performing Database operations the Fusion IO was competitive with other leading 15K SAS drives.  But when running as a web server or file server it was 4x - 6x faster than the leading SAS drives.  I would love to put one of these in my system, but with a price tag of $3K for the 80 GB model, and $14K for the 320 GB model I think I will hold off til these become more mainstream, or maybe in 5 years when I build my next workstation.  Another thing to keep in mind is these have a 1.5 million hour life span before failure.  If this is true, the device will most likely out perform both you and your grand kids. ( 171 years ).  But in 171 Years I should be able to buy these things off ebay by the case for a dollar.  Not sure if my great great great great grand kids quantum computer will support PCIe though.