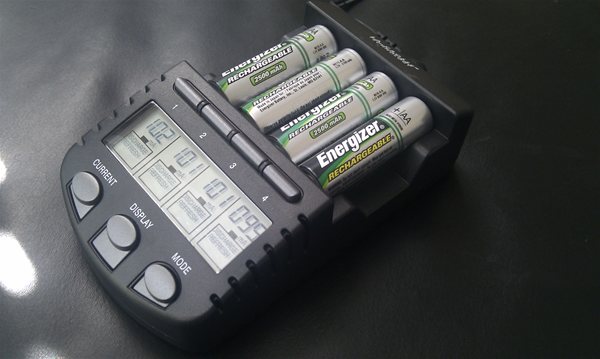 In this modern day everything is powered by batteries.  Especially if you have kids.  Every toy these days requires at least 3-4 AA, AAA, C, or D batteries.  There is no reason to buy regular old single use Alkaline Batteries.  This is because rechargeable batteries have come a long way in the past 10 years.  But before you go off and buy yourself a pack of Energizer Rechargeables, there is something you need to know.  All batteries are not created equal, and the same goes for chargers.  If your set of rechargeable batteries seems to no longer hold a charge, it could be it has developed a memory.  However if you have the La Crosse BC-700 AA / AAA Battery Charger, then you can usually refresh these batteries removing the memory making them like new.

Why the La Crosse Battery Charger is Better than other chargers

Unlike other chargers that force you to recharge batteries in pairs.  The La Crosse BC-700 allows you to charge individual batteries.  Each battery is individually managed.  Once a battery is full, you can remove it, and replace it with another battery that needs charging without interrupting your other batteries.  Another feature it has is the ability to refresh batteries to remove the memory effects.  This means your older batteries that seem to no longer hold a charge may still have hope.

Functions of the La Crosse BC-700

Charge Mode
The charge mode is the default mode.  When you put a battery in the charger after a few seconds it will automatically go into the charge mode.  The current used to charge your batteries is variable.  You can select between 200 mA, 500 mA, and 700 mA.  200 mA is the default charge mode as it is the best current to preserve the life of your rechargeable batteries. However at 200 mA it will take about 13 hours to fully charge a 2600 mAH Battery.  The 700 mA current will charge a 2600 mAH battery in about an hour.  La Crosse also made a BC-900 battery charger that featured a 900 mA current charge rate, but from what I have read online these were recalled due to overheating issues.  The BC-700 is in my opinion the best charger you can currently buy.  When the battery is fully charged it will display FULL on the display.
Discharge Mode
Discharge Model will discharge your batteries to remove any memory effects, then it will fully charge it.  When it is finished it will once again display FULL on the display.
Test Mode
Test mode is similar to Discharge mode.  Except it will first fully charge the battery then fully discharge the battery, then when it is finished it will display the Capacity of the battery in mAh or Ah.
Refresh Mode
I also like to call this battery repair mode.  The charger will charge and discharge the battery over and over again to ensure all memory effects are removed.  Finally when the charger detects no more repairing is possible it will fully charge the battery.  If you have a battery that seems to self discharge quickly, or your battery's capacity seems to not be what it should, the Refresh Mode should make your batteries like new again.  However keep in mind that Refresh can take several days to complete.  The charger will continue to charge and discharge the batteries until it determines the battery if fully refreshed.

How does the La Crosse BC-700 Charger remove Memory Effects with Refresh?

You put your batteries into the charger.  Select the Refresh mode. The charger will then discharge the batteries at a rate of 100mA, then when it has detected they are fully discharged it will charge them at 200mA.  The charger will then repeat this process over and over again until it detects the battery is no longer taking any more juice.  At the end of each charging cycle the display will show you how much juice the battery took on the charging cycle.  At first you might notice it will display a low value like 700 mAh.  But eventually after several days on the refresh cycle it will display a value like 2.400 Ah.  Just be aware the refresh mode will take several days to complete.  If you don't notice the displays changing don't worry, the charger did not freeze up on you.  Just leave the charger alone.  It could even take up to a week depending on how bad the memory in the batteries are.  Naturally the cycles at the end will take longer.  If you have a 2600 mAh battery, at 200 mA charging rate it will take 13 hours to charge.  Then it will take 26 hours to discharge at 100 mA.  Like I said the entire process could take up to a week to complete.


Displays
Anytime during the charging process you can toggle the display to see more information about the batteries. Display Capacity
Here you can see the current capacities of the batteries.  This is measured in mAh or Ah. Display Current
This will show you how quickly or slowly the charger is pushing Amps through the batteries. In this case the discharge rage was 100 mA, and charge rate was 200 mA.

What type of Batteries will the Lacrosse BC-700 charge

It will work with AA, or AAA batteries that are NiMH or NiCd

What are the best AA or AAA batteries

Its important to not judge a battery by just its mAh Rating.  If you have a 2600 mAh battery and it quickly discharges itself within a week that is not going to be a very good battery.  The best batteries have little to no self discharge.  The most well known batteries of these type are the Sanyo Eneloops.  These cost about $10 for a pack of 4.  The come precharged, and will not self discharge unlike the other NiMH batteries. About 2 years ago I went out and bought 12 Energizer Rechargeables.  These are the ones with the green accents on the label.  I needed these batteries for my DSLR's Flash gun.  I would fully charge them using the Energizer charger, put them in my flash, and turn the flash on to test it.  Everything worked great.  So I put my flash in my camera bag.  Then 2 weeks later when I needed to take a picture of my son doing something.  I pulled out my camera and flash.  When I turned on my flash it gave me the battery dead indicator.  My batteries had gone from full to dead within 2 weeks just sitting in my flash gun.  I tried another set, that was not in the flash gun and same thing.  They had lost their charge too.  So for the past year, my photoshoots have to be planned in advance. If I am going out to take pictures for the night, I have to make sure I fully charge all my batteries the night before.  Now to be fair.  I did use these in my flash gun.  This means I would use them to a certain degree, then pull them out and recharge them.  There is a good chance that they cheap charger I was using, and the way I used the batteries resulted in a very thick memory to form inside the batteries.  So I am not saying that these batteries suck, but they do tend to be more vulnerable to developing a memory than the newer Eneloops.  Hopefully running my older Energizers through my La Crosse BC-700 Charger will make them like new again. However my Sanyo Eneloops have sat in my flash gun for the past month and they still show a full charge.  It is said that these batteries can go for well over a year without self discharging themselves, plus they can take 2000+ recharge cycles, while other rechargeables can only take 200-500 recharge cycles max.  They might only be 1900 mAh, vs the 2600 mAh of the Energizers, but what good is a 2600 mAh battery if you they can't be stored for later use?  Eneloops are built with the latest in NiMH technology.  They come precharged, and their self discharge rate is lower than every other NiMH battery on the market.  To summarize the Eneloops are the best batteries  you can buy at this point.

So if you are looking for the best Batteries and Charger.  Get the Sanyo Eneloops.  and the La Crosse BC-700.  I am starting to think that other dumb chargers are one of the reasons most NiMH recharables seem to go bad.  Getting a good charger can bring your old batteries back to life.
Permalink
18311 Visitors
18311 Views
Tweet

BC700 | Dec 29, 2011 4:11 AM
I agree that this is one of the best chargers ever made.
Bryan Green Photography | Feb 5, 2012 11:32 PM
Awesome article and a very thorough review! I'm a photographer and I maintain an inventory of approximately 30 AA batteries. I've been using the cheap-o chargers then come with the batteries, your article has finally convinced me of the need to purchase a more professional charger.

I'm really anxious to see how my old batteries perform after the "refresh mode".  Until I read your aritcle I didn't know the charger would display how much juice the battery took on the charging cycle. This sounds great, but hopefully you can access this historically? It's not likely I'll be in front of the charger at the moment it finishes the charge.
Paul | Feb 6, 2012 2:14 AM
@Bryan
Unfortunately after the battery is charged it just says FULL on the display, and there is no way to see exactly how much power it took in.  During the charging cycle you will be able to see the max amount of juice it was able to fill during each refresh.  The charger does help to wipe out the memory from older batteries, but one of the negatives of older batteries is still their inability to retain their charge when not used for an extended period of time.  I now use only Eneloops.  I also have found their capacity is higher than the advertised 2000 mAh.  Being able to take a set of Eneloops that were charged 9 months ago and they still had full charge is awesome.  My Energizers on the other hand would be almost worthless after sitting in storage for a week.