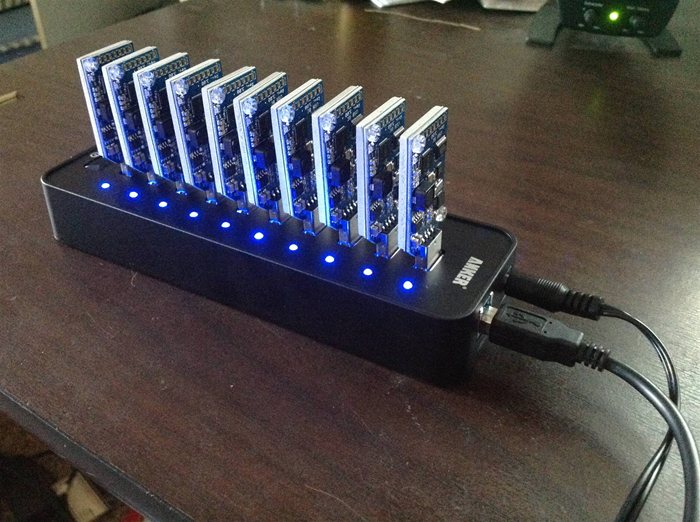 When you first start getting into the bitcoin mining business, you have two choices to make.  Should I build a GPU based system with several graphics cards, or should I just buy a bunch of USB ASIC Block Erupters?  The Answer lies in how commited you want to be to mining bitcoin, and how much faith you have in this crypto currency.

What are the Pros of USB based ASIC Block Erupters for bitcoin mining?

These little devices have only been around for about 2 months.  They are energy efficient using about 3 - 5 watts each, and they don't tax your hardware, meaning you can continue to do real work on your computer while they are mining.  Their hash rate is about 330 - 336 Mhps.  If you wish to scale up its as simple as buying more sticks, and filling every USB slot on your machine.  Then when you run out of USB slots, you buy large USB hubs and fill those as well.  You computer can handle upt o 127 USB devices at once.  So if you were to max out your system, with say 125 of them, ( leaving spare ports for your keyboard and mouse ) you could theoretically run 41.625 Ghps, yielding you about $75 per day.  Cost is another great thing about them.  Retail you can easily pick them up for about $150 each.  If you are willing to buy 50 of them in bulk, and wait a few weeks, you can get that price down to about $90 each.  They are the perfect device for computers of al shapes and sizes since they dont' tax your CPU.

What are the Cons of USB based ASIC Block Erupters for bitcoin mining?

This answer has to do with faith of bitcoin as a currency.  Lets say you bit the bullet and bought 100 of these devices.  You have a pretty good thing going.  Then all the sudden the price of bitcoin drops, or even worse it crashes( government shuts it down, Big investors dump their shares ).  Now you have 100 of these devices that were designed to mine something that no longer exists.  Their price on ebay drops to almost nothing.

The second Con is hardware in the bitcoin world rapidly depreciates as the next best thing comes out.  The larger ASIC miners that can do 50+ Ghps, could make the USB miners obsolete. However the companies that make those larger miners have been having trouble filling orders, making some believe they have problems actually making a working miner.

What are the Pros of GPU based bitcoing mining?

Buying a large graphics card such as an HD 7950, 6990, or other ATI / AMD based graphics cards, can make an impressive amount of bitcoin.  Cards like the 6990 are said to generate 700+ Mhps.  These cards can also be picked up for around $200 - $350 each used on ebay.  Since its a graphics card is Bitcoin tanks, it still has value for gaming and other uses.  Besides what better excuse to upgrade to that monster graphics card setup than bitcoin?  For people wanting to get even more mining capacity out of their rigs, they can install multiple graphics cards.  Using riser cables some guys have filled their system with 6 graphics cards, and have pushed 4+ Ghps out of their computers.  If you are looking to get int bitcoin but want to protect yourself in case bitcoin tanks,  GPUs are the way to go. what are the Cons of GPU based bitcoin mining?

Energy usage is the big one.  Each graphics card will use on average about 200 watts.  The computer stand alone will use another 100 - 200 watts depending on your system configuration.  Even after building a smallish mining rig you could easily be running 500 watts.  This means you are eating up 12 KWH per day or 360 KHW per month.  This means your mining rig is costing you about $36 / month in electricity assuming your KWH cost is 10 cents / KWH.  This is just taking into account the energy your mining rig needs to run.  You need even more energy to keep it cool.  Anyone that has worked on a computer in a small office space knows how hot things can get.

If bitcoin does tank, there will be thousands of high end graphics cards hitting ebay as guys try to get out.  This is great for gamers tryiing to pickup some high end GPUs but bad if you are also trying to sell yours.  The demand won't keep up with supply and you will see $300 graphics cards struggle to sell for even half that.   But they still be will worth more than some ASIC miner that can't do anything buy bitcoin mining.

Either way you decide to go there is a bigger issue to be aware of.  Your yields for mining bitcoin are directly related to the hashing power of the network.  The more people that get into Bitcoin mining, the faster Bitcoins are generated.  But Bitcoin has an difficultly variable that increases to keep up with the network.  It increases to ensure that the network will only be able to mine a bitcoin every 10 minutes.  This difficulty level is adjusted every 2016 blocks, or every 2 weeks on average. You can learn more about the Bitcoin difficulty level here.

Each time the difficultly level increeases, it takes more hashing power to get the same yields.  Example you could be mining at a rate that would yield you $5 per day.  The difficulty goes up, and now your yield drops to $4.25 per day.

This brings up the concern of all Bitcoin miners.  Hardware depreciation due to lower yields.  When everyone gets into bitcoin they are assuming that they are going to make X per day mining at their hardware's current rate.  But the big unknown is at what rate will they be able to mine in 6 months? The graph above comes from http://bitcoin.sipa.be/

As you can see the Hasing power of the network mining for bitcoin was pretty consistent til March 2013. Since then it started climing rapidly.  Just in the last week I have seen my own pool at bitminter.com go from about 7.5 Thps to 9.5 Thps.  Think of it like this.  Each time Network Hashing power doubles, your hardware's ability to mine for bitcoins drops by 50%.  To put this into perspective, Lets say a buy got int bitcoin mining back in April 2013.  At the time his mining Rig might have made $20 per day.  Back in those days.  Today his rig would only make about $5 per day.

Even though many guys are likely to shutdown their mining operations, as their yields drop, others will simply sell their hardware and move towards the USB ASIC miners, or even the dedicated ASIC miners.  Something I do want to point out is I don't believe we are going ot see a huge increase in Hashing power from the network.  I see most guys upgrading their hardware to gain more effeciency, and a little capacity,  but the big fear of the large ASIC miners throwing off the balance of power is unjustified.  Here is why.  There are thousands of customers who have prepaid for those large ASIC miners.  My theory is they are already mining for coin.  The companies are running them to mine for themselves, plus work out any bugs that might appear.  So today's Hashing rates reflect a good number of these pre orders.  Its just the companies are using them to mine instead of the customers.

I am considering a larger video card in the short term.  If I see the network Hashing capacity flatten out or drop then I will jump into the USB based ASIC miners.
Permalink
77861 Visitors
77861 Views
Tweet