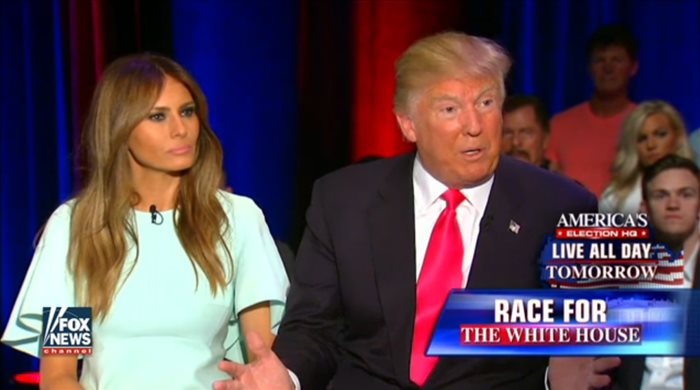 As polarizing as Trump is, there is some logic behind why people like him, and its not in his greatness, its in his flaws. This was very apparent during a sit down Trump and Melania had with Hanitty on Fox News.

The first thing people will notice is the external qualities of a person.  What they wear, how they dress, how they do their hair, what they drive, where they dine, ext..  These are the kinds of things that a photo could capture.  The Trumps without a doubt excrete success just by the material attire and surroundings.

Once a person has taken in a person's external qualities they move on to their behaviors. How they interact with others, how they walk, what kind of body language they display, even their vocabulary and accent.  We compare these qualities with other people that we have had experiences with in the past.  These qualities can say more about a person than what they say.

When something looks too good to be true it usually is.

The truth behind why people Love Trump isn't because he is successful, or that he is going to build a wall.  Its that he is not a perfect person. He has flaws, which there is no hiding.  His Hair has been the topic of countless jokes.  He talks in circles.  He uses words like "Great", "Terrific", "Huge".  His facial expressions exposes every thought and feeling he has, and he seems to not hold back saying exactly what is going through his mind.  He is Steve Stiffler from Amerian Pie.  Seeing all his flaws out in the open gives people a sense of comfort.

There is a phrase behind every great man is a greater woman.  Melania couldn't fit this vision any perfectly.  She is Attractive, Tall, Skinny, and has a Classy Sense of Style.  Even though her face doesn't move that much ( Thanks Botox! ), Her eyes and body launguage give away exactly what she is thinking.  There is nothing about her body language that comes across as fake, bitchy, or stuck up.  She seems humble about what she has. You can tell she doesn't agree with everything Donald says, or how he says it, but she maintains a sense of composure, and defends her views when asked, but she doesn't use anger to defend them.  She focuses on raising their son.  They have the money to afford a small army of nannies to raise their son, which would let her do what most trophy wives do, but she instead prefers to be with her son.  These are all qualities that any woman would respect.  The fact she used to be a super model doesn't take her down either.  An implied nude that is published in a major magazine, is not seen the same as a career in porn.  I have news for you Ted.  Even a career in Porn isn't as damaging as it used to be.  Over the past 30 years Entertainment has continued to push the limits and get more violent, more sexual, and more explicit.  What was over the line 20 years ago, is today mainstream.  Sure a photo like that might get some of the seniors upset and voting for Ted Cruz, but most people under the age of 50, see it for what it is.