A few months ago I noticed that one of my clients websites seemed to be getting spikes of traffic.  However with spikes in traffic most clients would report an increase in sales or business.  When looking at the stats server, the requests were for pages and files that were not even on the server, and were for technologies ( PHP ) that I do not run on m box.  If you see requests for files like /prx2.php, /phpmyadmin/config/config.inc.php, /roundcubemail/readme, or /webmail/readme.  You might want to read this article.
Read
4711 Visitors
4711 Views

I love windows 7, but I hate the way they open documents under a single window.  I googled for a long time to find a fix for this.  Finally I found the solution.  If you want to force Windows 7 to open your Applications especially Excel, Word, Internet Explorer, Firefox in a new window, then I have the solution. Get ready to make a simple Registry Edit to make windows the way run more like it used to under XP
Read
123 Comments
207969 Visitors
207969 Views

I knew I was going to make the switch to Windows 7, but I wanted to make a few upgrades before I did this.  These upgrades included hot swap trays for my SATA drives, and extending my SAS RAID array from 2 drives to 4 drives.  However this forced me to get a Dedicated RAID controller, as the ASUS board only supports two SAS drives.  On this blog I will focus on the SAS RAID upgrade using the Adaptec 4805SAS RAID card and 4 x 15K RPM Fujitsu SAS Hard Drives.
Read
2 Comments
9456 Visitors
9456 Views

Hacker Attacks and Invalid character in a Base-64 string

On my websites I have them setup to email me anytime a server error happens.  If you ever get an error like "Invalid character in a Base-64 string",  This is likely a hacker attack.   In my case it was on the members login on my client's website.  I logged in and shut down the site.  10 minutes later I started it back up and the hacker had left.  Interesting is what the HTTP RAW data reveled.

Never seen these values before.  According to the logs the IPs were from hundreds of compromised systems. However they all had these values in common.   I am going to add a rule to detect the Class A IP in the 80.x.x.x block in the HTTP_X_FORWARDED_FOR, and block.  Hopefully this helps some other people out
Read
3726 Visitors
3726 Views

Recently I have noticed that the open rates of a few of my client's newsletters are going down.  This is leading me to believe that most free mail servers are using yet another litmus test to detect and block spam.  Unfortunately those of us with legit bulk emails campaigns are also feeling the pinch.
Read
3920 Visitors
3920 Views

Now that the server world is heavily adopting SATA drives and SAS drives for those who want extra performance,  there are a lot of people wondering how this technology compares to the old IDE and SCSI drives.  Time for some performance benchmarks to put this question to rest.
Read
15 Comments
49928 Visitors
49928 Views

If you have ever run into the problem of buying or selling something on ebay, only to have it not work once it reaches it destination, you know the kind stress this creates.  Basically the Dell Poweredge 1750 Server I had was not booting up, and would flash an orange / amber light on the front, and had no display, and no beeps.  The solution was pretty simple, Reseat everything!
Read
12439 Visitors
12439 Views

With the huge disappointment of Windows Vista. Microsoft needs to make waves with the highly anticipated Windows 7 OS.  There have been several rumors, some of which could have a huge impact on sales for hardware manufacturers.  Keep in mind there are just rumors.  But if true Microsoft may been a good company to invest  come June 2009.
Read
3453 Visitors
3453 Views

utilizing your core i7 with SETI at home 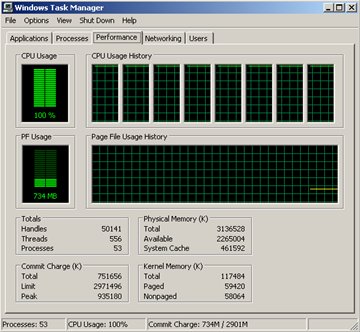 Now that you have your awesome new core i7 workstation ( like me ), its a shame that whenever you look at task manager you rarely see your 8 processing threads being utilized.  Well if you are one of those people that prefer your 4 cores not being hanging around the water cooler all day ( System Idle Process ). Then I have just the program for you.  Help in the Search for Extraterrestrial Intelligence ( SETI )