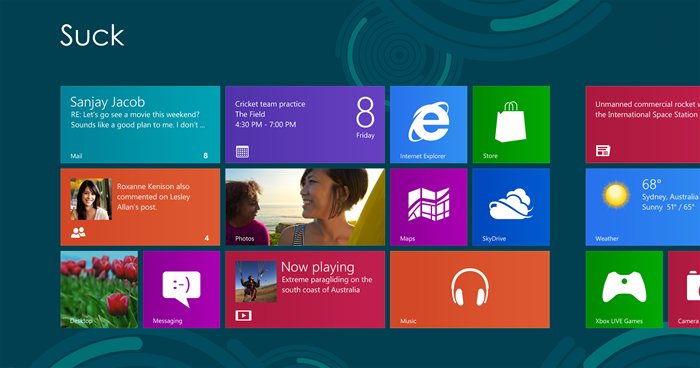 Its no secret that I am not a big fan of Windows 8.  20+ years of innovation  thrown out the door, because somebody at Microsoft wanted to be cool.  Here is how Microsoft could Redeem themselves with Windows 9.

Whoever you find to run the company must not live in a world of denial.  Steve Balmer would never admit the potential of his competitors.  This made him look blind to the growth Apple and Google Achieved.  The new CEO will have to be a younger guy, preferrably someone with some experience actually writing code.

The first thing I want to hear out of the new CEO is they must flat out say it "Windows 8 Sucks", I am here to fix it.

3. Bring back the traditional Start Menu

I don't care for metro.  If you want to keep it fine, but the traditional Start Menu should still be an option.

Here is an idea.  include a bitcoin miner with the factor install of windows ( Microsoft Mining ).  Its great way to embrace the future, and gain street cred from the super users.  If microsoft was smart they would even start up their own mining pool, and make it the default pool ( similar to what they did with IE years ago ).

5. Stop trying to combo all your software into one suite.

Back in the Windows XP and Vista days, there was outlook express.  An easy to use Email client.  But recently Microsoft has decided to try to brand the live mail concept.  Live Mail Sucks.  Plus its bundled with a ton of garbage I don't need or want.  Keep your software as separate Apps that are easy to install or uninstall.

6. Stop trying to force us into subscription models

Granted I know this is to fight piracy, but MS Office should stay a stand alone installable application.  I should not be forced to pay a subscription for Office 360, or any other Microsoft product.

Stop trying to act like you are special and make IE a standards compliant browser that behaves the same way as Google, Firefox and every other brower.

The first thing I do when I get a new computer is I completely reinstall the OS to make sure non of the Manufacturers bloat is taking up precious system resources.  Google Recently has started selling Google Edition Android Phones which are bare bones phones with non of the carrier or manufacture bloat.  Microsoft should do the same for new computers.

I should be able to take an LTO Tape Drive plug it in and have it auto detect just like every other device on my computer.  Also Microsoft should have some sort of built in LTO Tape backup / management software.  LTO is not going anywhere, plus it provides a more secure backup than a hard drive.

Whenever your memory usage in windows goes above 50% utilization, your performance will take a nose dive, as the system will start to use your hard drive as temporary memory.  This might have had a purpose back when memory was expensive( back in the late 90s ), but today everyone is sitting with at least 4 GB of memory.  I should be able to use 100% of my memory without any sort of performance loss.

Categories associated with How Microsoft can Redeem itself with Windows 9