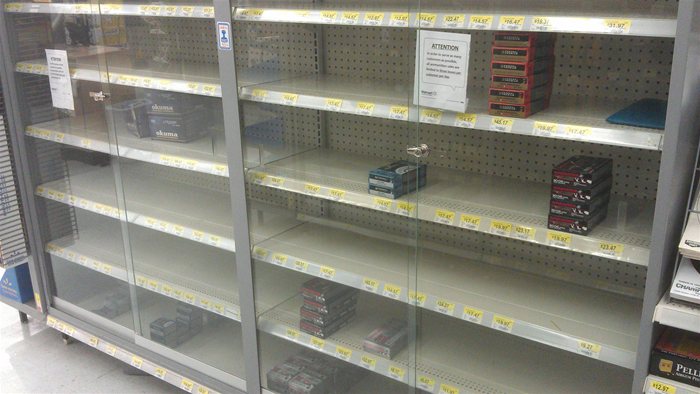 Any Texas man will tell you. A trip to Walmart demands you stop by the Hunting and Fishing Department to take advantage of any sales on Ammo. So today when my wife asked me to stop by Walmart to pick up a few things, I of course decided to checkout the prices on 9mm. I had herd rumors that there were national shortages in ammo, but seeing an empty ammo cabinet at the Friendswood Walmart leaves you somewhat mentally scared.
Its a good thing I already have a few boxes at home, but still when you find the nation's largest seller of Firearms and Ammo... out of Ammo, this puts you into a state of shock. First thing that I thought of was, I need to start reloading my own ammo. Get a Press, some dies, and then go to work building up a nice back stock. I could team up with some buddies and we could all chip in for the initial investment to get the hardware. My local range already told me they wouldn't mind I take some of their used brass. But unfortunately Gun Powder, Primers, and Bullets are also in short supply. Even though reloading would get my cost per 50 rounds of 9mm down to $5 or so. Its a mute point when you can't even get the raw materials.
I can see it now, People will start going around stealing Wheel Weights ( they are made of lead ) from parked cars just so they can melt them down, and forge their own bullets. Still need primers, and powder which is a problem.
So for anyone who planning on buying Ammo from the Friendswood Walmart, unless you need 30-06, you are going to be disappointed. There is even a sign that says
ATTENTION
In order to server as many
customers as possible,
all ammunition sales are
limited to three boxes per
customer per day.
Apparently thats not helping. Maybe they should rethink their rationing to 1 box per caliber per customer per day. That way you could get a box of 45 ACP, and a box of 9mm. but not 3 boxes of 9mm.
Somehow I suspect this shortage in Ammo isn't affecting Obama's Secret Service Detail.
Update 2/10/2013
I returned to walmart again to see if their stock was replenished. And NO. As matter of fact there was less ammo than in the original photo. The only handgun ammo I could find, was Federal 45 Auto, JHP. 20 rounds for about $22. Seems even hoarders have their limits for what they will pay. So if you need ammo for your 45, the Friendswood / Pearland Walmart did have a few boxes of these over priced munitions.
I talked to the person working the department and they said its been a while since they had a sizable shipment.
Update 6/5/2013
The other night ( late, like 2 AM late ), I dropped by wallmart to pickup some coat hangers.  I was in the middle of a major closet organizing project, but that is for another blog.  However I was able to talk to one of guys stocking things the in sporting goods section.  He said they have not had a shipment of ammo in months, but said that walmart has instead decided to only stock the walmart locations which also sell guns.  Makes sense since its hard to sell people guns if you can't also sell them ammo.  Of course all the walmarts close to me don't sell guns.  The closest one that does is Alvin.  So I guess next time I will have to make a little road trip to stock up.