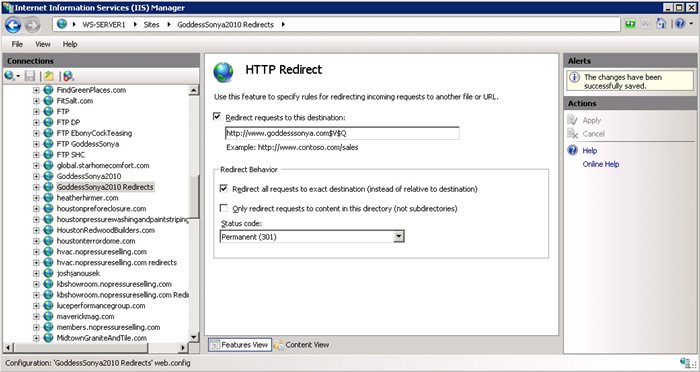 Everybody knows that in order to properly preserve Google Page Rank when you are moving a page on a site, you need to perform a 301 Redirect to the new page, as this tells search engines this is a permanent move, and to record it into their index.  However few people realize the additional problem of duplicate content across multiple domains.  So if you have both your domain and your www subdomain pointing at the same site, its likely that google is penalizing you for this. So in this article I show you how to properly setup a website with multiple domains using IIS 7.5 and 301 redirects for good SEO.
Read
4 Comments
30655 Visitors
30655 Views

If your websites are going down, due to your application pool failing, or being automatically shut down after a few application errors, then you have a major problem on your hands.  In my case the symptom was A process serving the application pool suffered a fatal communication error with the Windows Process Activation Service, in my system logs.  If you have each website running in its own application pool then you know which website is going down, but the errors being displayed give you no hints as to the cause.  I recently had a website that was randomly going down.  Sometimes it would go down every few days, and other times it would only crash once a month.  So I finally did some digging for the cause, and found it.  If you don't know where to start in debugging your crashed application pools, this might help.
Read
36 Comments
200605 Visitors
200605 Views

If you are like me you take server security very seriously.  You lock down all your ports, and you even firewall IPs that try to use exploits.  But eventually you determine that non of your clients do business in China or Russia, and its easier to just block those countries, rather than trying to block individual IPs.  Well this brings another problem.  Windows Server 2008 R2 has no user friendly way to do a bulk import of IPs.  Luckily I found a VB script that you can run and it will automatically add the IP blocks you want to block.
Read
51 Comments
32741 Visitors
32741 Views

If you have ever run into the problem of buying or selling something on ebay, only to have it not work once it reaches it destination, you know the kind stress this creates.  Basically the Dell Poweredge 1750 Server I had was not booting up, and would flash an orange / amber light on the front, and had no display, and no beeps.  The solution was pretty simple, Reseat everything!
Read
12420 Visitors
12420 Views

Most Software still does not Utilize Multicore Chips

Normally when you upgrade your computer to some new wild multicore chip, as I did with the Intel i7.  You would expect some dramatic performance results.  Unfortunately it would seem that most software was not written to take advantage of the multiple cores.  Read more for an in depth rant about software and the intel i7
Read
4199 Visitors
4199 Views
1